Opportunities for funding and collaboration between Brazil and China 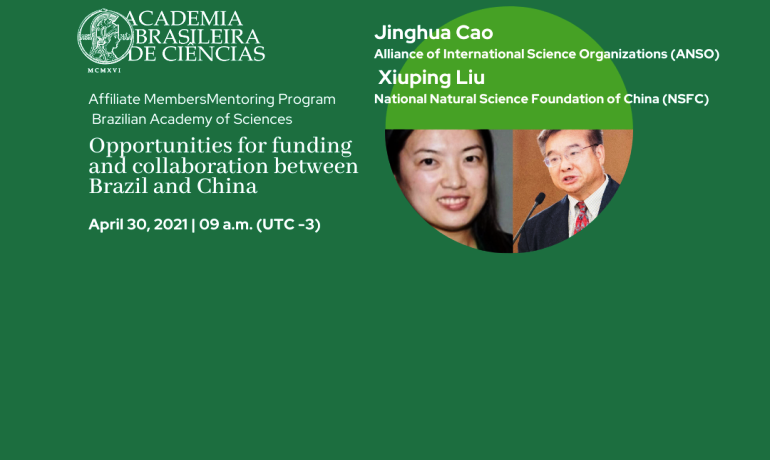 The mentoring program is organized monthly, now in its 7th edition. This program is coordinated by Jaqueline Mesquita (UnB) and is organized by the representative members of the affiliate members: Ana Chies (UFRGS), Andreza de Bem (UnB), Marcelo Mori (Unicamp) and Raquel Minardi (UFMG).

The invited speakers to thi edition are Prof. Jinghua Cao (ANSO) and Prof. Xiuping Liu (NSFC). It will happen on the 30th of April, at 9 a.m (Brasilia time).

Xiuping Liu joined National Natural Science Foundation of China (NSFC) in 2004 as a Program Manager at the Division of American, Oceanian and Eastern European Affairs. Over the years, she has been the key coordinator at NSFC for its international programs with countries in Americas and Oceania. With her liaison, NSFC has set up partnerships with funding agencies in Latin America, such as the CNPq, Fapesp, Capes, CONICET, CONICYT and CITMA. Liu was the Deputy Division Director during 2013-2015 and became the Division Director of Division of American and Australasian Affairs in August 2016. She has a master degree on Public Policy and Management from Carnegie Mellon University and a master degree on International Relations from China Foreign Affairs University.

Prof. Jinghua Cao is the Executive Director of the Secretariat of the Alliance of International Science Organizations (ANSO). Prior to this position, he was Director General of the Bureau of International Coop (BIC), the Chinese Academy of Sciences (CAS). An English major and graduate from the Beijing Foreign Languages Institute in 1982 and a master in business management and international policy from City College of New York (CCNY, US) in 1987, he has worked in different posts in international relations at CAS. He also worked as a Second and First Secretary in the S&T Section of the Chinese Embassy in Washington D.C. US from 1995 to 1997. His research interests are science policy and international cooperation in science and engineering.