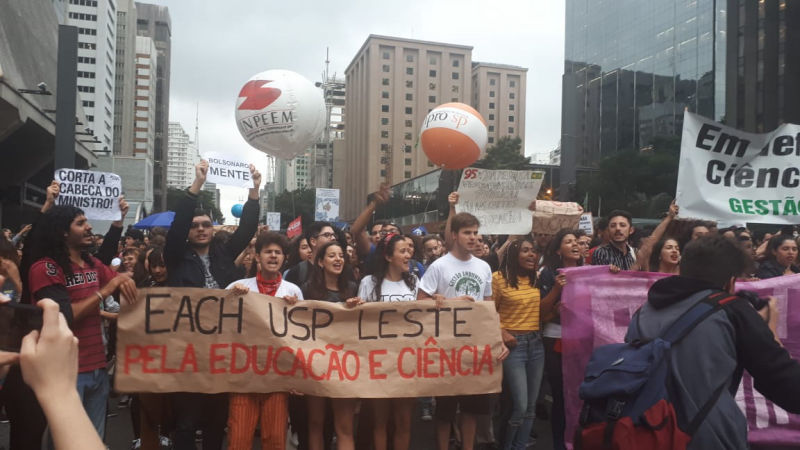 Students in São Paulo protesting the government’s cuts to education and science on May 15. Tabita Said

Students and faculty across Brazil took to the streets on May 15 to protest against budget freezes and the suspension of new research scholarships enacted by the federal government on May 2. This has been the largest demonstration against the government since Jair Bolsonaro took office early this year, with an estimated turnout of more than 1 million people, according to the organizers.

While the cuts will not affect payrolls, and ongoing scholarships have been spared, students, scientists, and educators worry the situation could compromise the future of Brazilian science and higher education.

The government calls the cuts “contingencies” and insists the money—a moving figure that is now thought to be 1.69 billion reais ($412 million US)—is only being withheld until the economic situation improves.

On the same day of the protests, congressmen forced Education Minister Abraham Weintraub to explain the cuts. He blamed previous administrations for the current situation and said the government’s priority is to support elementary and technical education.

While visiting Dallas, Texas, President Bolsonaro called the protesters “useful idiots and imbeciles,” and further disqualified them by saying they don’t even know “the formula of water.”

Helena Nader, honorary president of the Brazilian Society for the Advancement of Science, describes the situation of science and education in Brazil as “tragic.” She tells The Scientist in Portuguese, “I understand we need to balance the books, but I don’t understand how cutting in strategic areas will improve the country’s economy.”

Along the same lines, Luiz Davidovich, president of the Brazilian Academy of Sciences, notes that science should be seen as an investment. “Every real in Embrapa [Brazilian Agricultural Research Corporation, a research institute], for example, gives a return of 12 reais. That’s more than the world’s average,” Davidovich says, translated from Portuguese.

One of the first consequences of the freezes was the suspension of more than 3,500 new research scholarships for undergraduate and graduate student stipends. According to an official statement from CAPES, the federal agency responsible for undergraduate and postgraduate scholarships. “The measure is part of the actions undertaken by the institution to comply with the contingency of the federal public administration.”

André Antunes is one of the thousands of researchers affected by the suspension. After obtaining his PhD at King’s College London in the United Kingdom, Antunes recently returned to Brazil to follow his scientific career. He had been just selected for a postdoc position at the University of Campinas but his fellowship vanished overnight. “I passed [the university department] my personal data and when they tried to get me into the system they couldn’t do it,” Antunes recalls in Portuguese, noting he declined a job offer in New York to try to settle down here. Now, he worries he will have to start looking for opportunities abroad. “I’m about to give up on Brazil,” he admits, no longer able to join the lab.

The exact amount of the cuts and how they would be implemented has been a matter of controversy over the last weeks. On April 30, in an interview with the newspaper O Estado de Sao Paulo, Minister Weintraub said that universities that were underperforming or promoting “shambles” on their facilities would have their resources cut. As an example of shambles he cited having “naked people on campuses,” and pinpointed three specific universities. But just a few hours later, a high official of the Ministry of Education informed TV Globo that a 30 percent blockade would be applied to all universities and research institutes.

On May 9, following public outcry, Minister Weintraub appeared next to President Bolsonaro during a Facebook live session and said only 3.5 percent of the education budget would be blocked. He later explained this new figure in a video posted on Twitter, saying the 30 percent freeze will only affect discretionary spending, which accounts to less than 15 percent of the total budget. Some expenses included in discretionary spending are water and electricity bills, research materials, and scholarships. According to the minister, the rest of the budget, which includes payrolls and other compulsory expenses, will be preserved. As for the figures informed by the Ministry of Education in an official note, the amount blocked corresponds to 1.69 billion reais ($412 million US). The science budget faces a 42 percent cut.

But beyond the hard numbers, many scientists worry about the deeper meaning of the cuts. “It’s not a matter of money, it’s a matter of a new development model where there’s no room for science made in Brazil,” says Paulo Artaxo, a professor of environmental physics at the University of São Paulo and a member of the Intergovernmental Panel on Climate Change.

To Eduardo Góes Neves, vice-director of the archaeology and ethnology museum of the University of São Paulo, the cuts show the contempt that the government has for education and critical thinking. “This government has a strong support from a religious fundamentalist sector, which is probably what scares me the most. And fundamentalism hates doubt, it clings to ready-made ideas and wants to impose that worldview to everyone,” Neves says.

Government officials have repeatedly said that the situation could be reverted if Bolsonaro manages to pass his controversial pension reform. The government estimates the reform could save $270 billion US over the next 10 years. However, new budget cuts will likely be announced in the coming days, following a decrease in the GDP growth projection.