Education has as its main purpose the preparation of individuals for life, turning them into capable people for their own personal accomplishment and giving them the instruments necessary for a dignifying existence. With regards to the teaching of Science - including the precepts of Science, Mathematics and Technology - one should assist students in developing the knowledge and the habits of mind essential to the development of citizens capable of thinking critically and of dealing with the challenges of life. One should also supply them with the necessary conditions to fully exercise citizenship, aiming towards the construction of a fair and democratic society. The future of Brazil - its ability to promote a social and economical development and of creating a just society - depends greatly on the capacity of being able to guarantee quality education to the group of children who are school-aged. Having this vision as a start, ABC has developed throughout its history, distinct initiatives aiming towards contributing to the betterment of the teaching of science in the country. The Study Group on Science Education, coordinated by the academic Luiz Davidovich, was developed as an effort to better coordinate the several different actions the Academy has engaged in this area, via the mobilization of Academics who are concerned with the theme and have invested part of their time on this enormous national challenge.

Based on an agreement of cooperation signed with the Science Academy of France in 2001, ABC instituted the Program ABC in Science Education, in which it tries to stimulate a series of educational activities in Science, in Brazil. The activities in this program - coordinated in the past by the academics Fernando Galembeck  and Ernst Hamburger, and currently by the academic Diogenes de Almeida Campos - are a part of a more ample effort, on behalf of the Academy, of stimulating the education of sciences in Brazil in all its aspects, within its general mission of promoting scientific quality and advancing Brazilian science. Through an agreement signed in 2008 between ABC and Petrobras, within its Development and Citizen Program, the Academy performed throughout the year of 2009, a profound diagnostical analysis of the experience of the Program ABC in the Science Education, a program implemented in several Brazilian cities as a pilot program. In light of the international specialized literature, the study, which was coordinated by the academic Simon Schwartzman, presented a summary balance of the results of this program, vis-à-vis other scientific education programs developed in the country. The final result of this effort was the publication of The Education of Science in Brazil (2009). Aside from the efforts developed through the Program ABC in Science Education, the Academy has also been addressing the several aspects of the Brazilian Educational problems, having already produced important studies such as the following documents: Grants for the Reform of Higher Education (2004), coordinated by the academic Luiz Davidovich; The teaching of Science and Elementary Education: Proposals to Overcome the Crisis(2008), coordinated by the academic Keti Tenenblat ; and Childhood Learning: Neuroscience Approach, Economy and Cognitive Psychology (2010), coordinated by the academic Aloísio Pessoa de Araújo , which is currently in the final stages of editing. In order to better coordinate the actions developed in the area of education, and coordinate the implementation of the diagnostical recommendations presented in The Education of Science in Brazil, ABC instituted a Study Group on Science Education, which will be coordinated by the academic Luiz Davidovich. The actions of the group will attempt to strengthen the strategic role which ABC can have in this area, due to the academy’s capability of favoring and stimulating the contact of scientists with the educators, attempting to involve scientists in education at all levels, and therefore contributing towards the improvement of the formation and the performance of educators in the teaching of science. 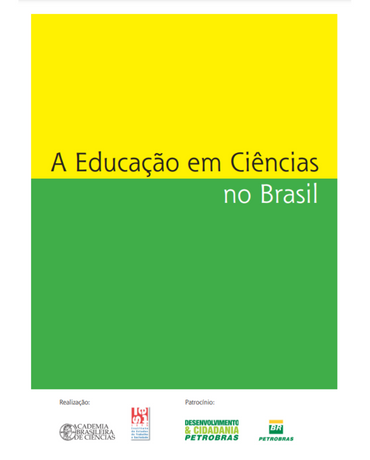