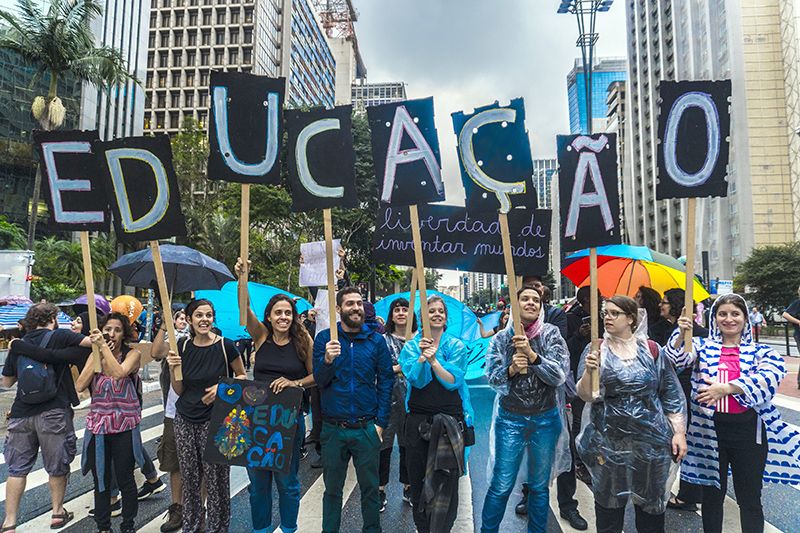 Protests against the Brazilian government’s cuts to education and science funding took place in more than 220 cities on 15 May.Credit: Cris Faga/NurPhoto via Getty

Brazil’s scientists are fighting back against President Jair Bolsonaro’s plans to slash funding for research and education programmes. Researchers have joined with members of Brazil’s legislature, the National Congress, to highlight the strategic role that science, technology, and education play in the country’s economic and social development.

Around 20 congressmen gathered with academic researchers, entrepreneurs and industry representatives to launch the Initiative for Science and Technology in Parliament in Brasília on 8 May. The announcement came on the same day that more than 60 Brazilian scientific bodies gathered in the National Congress to demonstrate their opposition to the cuts that Bolsonaro’s government has made to public universities and the national research system.

“The initiative will focus on issues where science and politics meet,” says Ildeu de Castro Moreira, a physicist at the Federal University of Rio de Janeiro (UFRJ) and president of the Brazilian Society for the Advancement of Science, one of the groups that is coordinating the project. Its main aim is to provide scientific advice to Brazilian parliamentarians — and to foster close relations with them by promoting open discussion on science and education issues.

The Brazilian initiative comes at a delicate moment for the country’s science and education sectors. The far-right Bolsonaro, who took office in January, has begun to dismantle the national research system, contradicting his campaign promise to make science and technology a priority and to increase Brazil’s spending on research from 1% to 3% of its gross domestic product.

And in late April, education minister Abraham Weintraub said that the government was planning to “decentralize” its investments in the social sciences and philosophy. Days later, the government announced that it would cut 30% of the funds for federal universities. The ministry also froze, without previous warning, more than 3,000 scholarships meant to support postgraduate research.

Thousands of scientists, professors, and students took to the streets on 15 May, in more than 220 cities across Brazil, to protest against the cuts in education and science funding.

Backers of the new science initiative say they are already finding support among politicians for policies that aim to boost research in Brazil.

“We have already started working to find solutions together with congressmen for some major draft bills in progress in the National Congress,” says Luiz Davidovich, a physicist at the UFRJ and president of the Brazilian Academy of Sciences, which is helping to steer the initiative.

One of the draft bills would prevent the government from using the country’s National Fund for Scientific and Technological Development to pay public debts. Davidovich says that this would help to ensure the mid- and long-term sustainability of government support for research.

The science and technology initiative also hopes to convince lawmakers to overturn Bolsonaro’s vetoes of legislation that the National Congress had approved on 7 January. The president struck down provisions that would regulate the creation of philanthropic endowment funds to support public institutions, such as universities and research centres.

The Brazilian project follows in the footsteps of similar initiatives in other countries. The United Kingdom’s Parliamentary and Scientific Committee has acted as a liaison between policymakers, scientific bodies, and science-based industry since 1939. Another group, Science & Technology Australia, has helped to nurture good relations between that country’s politicians and science and technology leaders. These links have resulted in policy changes that benefited science, technology, engineering and medicine, including research.

Supporters are hoping for similar success in Brazil, given the current bleak climate for research and education. Scientists in the country have struggled with successive budget cuts since 2013, says Fernando Peregrino, president of the National Council of Foundations Supporting Institutions of Higher Education and Scientific and Technological Research. But something has changed under Bolsonaro, he says: “It is the first time I have witnessed such hostility from the government to the scientific community”.

“They are trying to destroy the country’s system of science and technology, which has been built throughout decades,” Peregrino says. “And we must not let it happen.”